Article from the City of Opelika published December 27, 2016 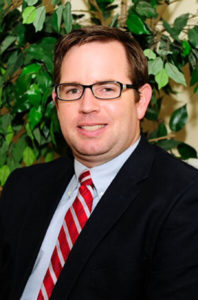 The City of Opelika welcomes Matt Mosley as the new director of planning. Mosley replaces Jerry Kelley, who is retiring after 10 years with the city. Mosley comes to Opelika from Pike Road, Ala., where he served as planning director since June 2015.

“Matt brings practical knowledge of planning, including zoning, land use, comprehensive planning and historic preservation,” said Mayor Gary Fuller. “We are fortunate to have someone like Matt join our team. He will bring a deep understanding of planning and city government to Opelika. And, he’s a big believer in customer service.”

Mosley graduated from Samford University in Birmingham with a B.A. in Geographic Information Systems/Environmental Science. He then went on to earn a master’s degree in Community Planning and Public Administration from Auburn University.

“It’s easy to see through examples like the rapid growth and success of Tiger Town and the redevelopment of downtown and historic areas surrounding it, among others, that Opelika’s citizens and leaders have embraced the principles of good planning,” Mosley said. “I’m very excited to continue the great work that the mayor, council, planning commission and staff have done to create a plan for the future of Opelika.”

Mosley began his career at Wiser Imagery Services in Birmingham, as a Geospatial Analyst and then moved back to Auburn in 2005 to work as the Senior Planning Technician for the City of Auburn Planning Department. In this role, he designed and organized Auburn’s Citizens Planning Academy to provide training and information on the field of planning to City Council members, city and county officials and citizens. He also collected and analyzed data for the Auburn Interactive Growth Model, among many other responsibilities.

He was later named Senior Planner and ultimately Principal Planner for the City of Auburn in 2014 where he supervised and trained new Planning employees during a reorganization of the department. He also coordinated development review with other city departments, implemented new regulations and was involved with the Historic Preservation Commission.

“We are delighted to have Matt Mosley come on board with the city.” Opelika Planning Commission Chairman Lewis Cherry stated, “He is an excellent choice and we’re grateful to Mayor Fuller for finding us such an outstanding replacement for Jerry Kelley. I’m looking forward to working with him.”

A native of Nolensville, Tenn., Mosley holds a certification from the American Institute of Certified Planners (AICP). He and his wife, Amy, have two daughters.